I thought January would be a quiet month on the orders front given that people are generally quite gloomy (Trump and Brexit haven't helped), and dry-January makes drinking a little unpopular. I was wrong. It seems that shot skis are as popular as in December (maybe I have Trump and Brexit to thank for that - that's something I suppose!) Anyway, my original plan for January was to get inventing and invented I have! Our new Shot Paddle is about 45cm in length with a carved hand

Who needs snow for Apres-Ski!?

The Shot Ski struck again this weekend at an Apres-Ski themed party in the Chew Valley. It created it's usual buzz and atmosphere of excitement, tinged with a little fear and nostalgic joy as my fellow 30-something and 40-something party goers relived those teenage days when we drank oh-so-many shots and partied without a care in the world! The ski was also responsible for many heavy heads on Sunday morning. The difference to our teenage years of course is that those heavy he

Covid can't keep us down!

Awesome retro photos on this ski!

Gearing up for winter weddings....

Summer is a time for water skiing.... and shots!

The little perks of running a shot ski business...

The Shot Ski 'Lock & Loader' - welcome to the Club 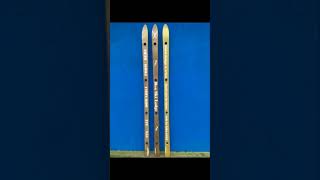